The Parish Council is hosting Defibrillator Awareness Training on Thursday 16th June 2022 at 6pm, the session will be run by South Western Ambulance Service further details on the poster.

The Law that allowed Parish Councils to hold remote meetings ended on 7th May 2021. This council is therefore returning to face to face meetings within current Covid guidelines at The Manor Hall. There will also still be a zoom link provided for meetings from June.

It is bonfire season again and on occasion they can be a significant nuisance in your neighbourhood. If you do wish to have a bonfire please consider your neighbours. Please ensure you are following correct guidelines and click on bonfire guidance North Devon Council for more information.

Do you have a highway problem? You can report any highway issues via the following link https://new.devon.gov.uk/roadsandtransport/report-a-problem/

Click on maintain Hedgerows and support wildlife throughout the Parish

The Parish Council is pleased to announce that it has been awarded £1,000 towards the replacement of the the bus shelter on the A399 project. Thank you to everyone that voted.

Berrynarbor Parish Council holds a prestigious award as part of the Local Council Award Scheme.  The Scheme highlights that not only does the council meet the requirements for operating lawfully it also goes beyond its legal obligations, leading its community and continuously seeking opportunities to improve and develop further.  The achievement confirms that Berrynarbor Parish Council achieves good practice in governance, community engagement and council improvement. 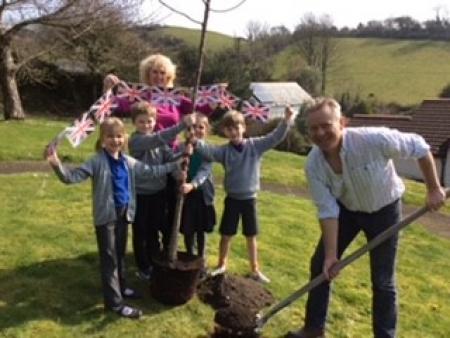 We hope you have all enjoyed the Jubilee Celebrations, to commemorate the Chairman of the Parish Council, Cllr Adam Stanbury, planted a Cherry Tree in Claude's Garden with the help of pupils from Berrynarbor School as part of the Queen's Green Canopy, thank you to County Cllr Davis for the funding towards the project.

The village of Berrynarbor, surrounded by steeply wooded valleys, lies in the West Devon  Area of Outstanding Natural Beauty between Ilfracombe and Combe Martin. The village has won many Britain in Bloom Awards and Best Kept Village Competitions.

St Peters Church, in the village of Berrynarbor, has a 15th century tower, a 17th century lychgate and a Norman font.

A stream runs through the picturesque Sterridge Valley and out into the Bristol Channel.

The Parish Council is pleased to be able to support local groups with grants and donations and so far this year has awarded:

Berrynarbor Pre-school - £100.00 towards an outdoor blackboard.